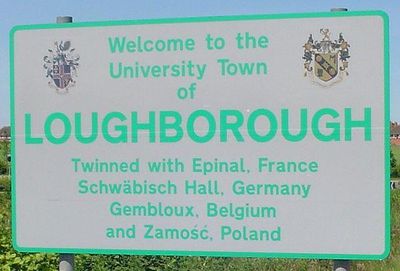 Loughborough LUF-bər-ə) is a town in the Charnwood borough of Leicestershire, England, seat of Charnwood Borough Council, and home to Loughborough University. The town had a population of 57,600 in 2004, making it the second largest settlement in Leicestershire. It is close to the Nottinghamshire border and within short distances of Nottingham, East Midlands Airport and Derby. The town has the world's largest bell foundry – John Taylor Bellfounders – which made bells for the Carillon war memorial, a landmark in the Queens Park in the town, of Great Paul for St Paul's Cathedral, and for York Minster.

Loughborough's earliest historical reference was to "Loughburne" in the 1086 Domesday Book. It appeared in a charter from the reign of Henry II as Loughburga, and in the Pipe Rolls of 1186 as Loughburc. The name means "Lough's borough or fortified place".