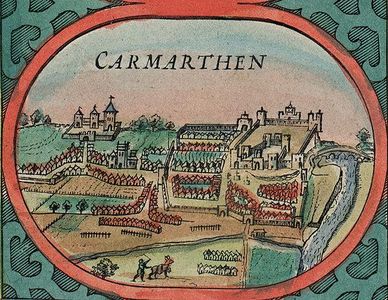 Carmarthen is the county town of Carmarthenshire in Wales and a community, with a population of 14,185 in 2011, down from 15,854 in 2001. It lies on the River Towy 8 miles north of its estuary in Carmarthen Bay. Carmarthen has a claim to be the oldest town in Wales – Old Carmarthen and New Carmarthen became one borough in 1546. Carmarthen was the most populous borough in Wales in the 16th–18th centuries, described by William Camden as "the chief citie of the country". Growth was stagnating by the mid-19th century, as new centres developed in the South Wales coalfield. Dyfed–Powys Police headquarters, Glangwili General Hospital and a campus of the University of Wales Trinity Saint David are located there.

When Britannia was a Roman province, Carmarthen was the civitas capital of the Demetae tribe, known as Moridunum . It is possibly the oldest town in Wales, recorded by Ptolemy and in the Antonine Itinerary. The Roman fort is believed to date from about AD 75. A Roman coin hoard was found nearby in 2006. Near the fort is one of seven surviving Roman amphitheatres in Britain and only two in Roman Wales . It was excavated in 1968. The arena itself is 50 by 30 yards ; the cavea is 100 by 73 yards . Veprauskas has argued for its identification as the Cair Guorthigirn listed by Nennius among the 28 cities of Britain in his History of the Britains. Evidence of the early Roman town has been investigated for several years, revealing urban sites likely to date from the 2nd century.