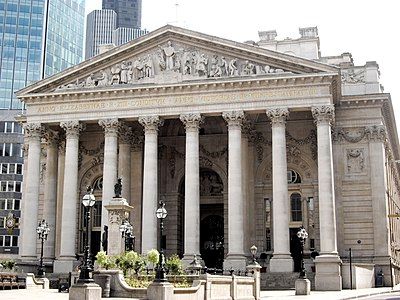 The Royal Exchange in London was founded in the 16th century by the merchant Thomas Gresham on the suggestion of his factor Richard Clough to act as a centre of commerce for the City of London. The site was provided by the City of London Corporation and the Worshipful Company of Mercers, who still jointly own the freehold. It is trapezoidal in shape and is flanked by Cornhill and Threadneedle Street, which converge at Bank junction in the heart of the City. The building's original design was inspired by a bourse Gresham had seen in Antwerp and was Britain's first specialist commercial building.
It has twice been destroyed by fire and subsequently rebuilt. The present building was designed by William Tite in the 1840s. The site was notably occupied by the Lloyd's insurance market for nearly 150 years. Today the Royal Exchange contains a Courtyard Grand Cafe, Threadneedle Cockatil Bar, Sauterelle Restaurant, luxury shops, and offices .