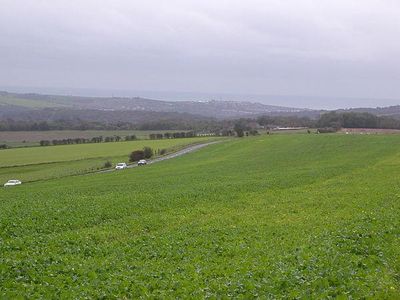 Ditchling Beacon is the third-highest point on the South Downs in south-east England, behind Butser Hill and Crown Tegleaze . It consists of a large chalk hill with a particularly steep northern face, covered with open grassland and sheep-grazing areas. Situated just south of the East Sussex village of Ditchling and to the north-east of the city of Brighton, it is the highest point in the county of East Sussex. A road runs from Ditchling up and across the northern face and down into the northern suburbs of Brighton, and there are car parks at the summit and the northern base. Various charity, sporting and other events which are run regularly between London and Brighton incorporate this steep road as a challenging part of their route. It was also featured as a climb on the first of two days' racing in Britain in the 1994 Tour de France. The Tour organisers gave Ditchling Beacon a climb category of 4. 20 years later it was included as part of the route of the seventh stage of the 2014 Tour of Britain from Camberley to Brighton.
Ditchling Beacon is part of the Clayton to Offham Escarpment biological Site of Special Scientific Interest and an area of 24 hectares is a nature reserve managed by the Sussex Wildlife Trust.