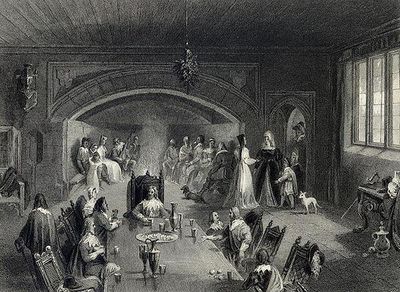 Wycoller Hall was a late sixteenth-century manor house in the village of Wycoller, Lancashire, England. The hall was the centre of a sizeable estate but subsequently fell into disrepair. The ruins are now listed, and form part of Wycoller Country Park.

Wycoller Hall dates back to the end of the 16th century, and was built upon the site of a house occupied in 1507 by Piers Hartley. By the 1590s a substantial house had been built, probably sometime in the mid 16th century, replacing Piers' original dwelling. The estate then came into the possession of the Cunliffe family, after the marriage of Pier's daughter Elizabeth to Nicholas Cunliffe in 1611. They had a number of children, one of whom, John, married Grace Hartley in 1628. The Cunliffes settled at Wycoller in the 1720s, after losing their ancestral home to debts. The estate then passed through several brothers, all of whom died without issue, before passing to the grandson of one of the sisters, Henry Owen, on the condition that Owen took the name Cunliffe. He took the name Henry Owen Cunliffe, and became the new squire. He embarked on a large building project for the hall, to create a home that he felt would be worthy of his position, and that would attract a new wife.