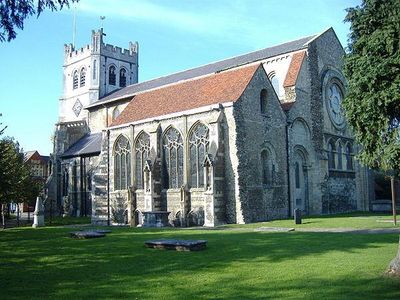 The Abbey Church of Waltham Holy Cross and St Lawrence is the parish church of the town of Waltham Abbey, Essex, England. It has been a place of worship since the 7th century. The present building dates mainly from the early 12th century and is an example of Norman architecture. To the east of the existing church are traces of an enormous eastward enlargement of the building, begun following the re-foundation of the abbey in 1177. In the Late Middle Ages, Waltham was one of the largest church buildings in England and a major site of pilgrimage; in 1540 was the last religious community to be closed during the Dissolution of the Monasteries. It is still an active parish church for the town.
The monastic buildings and those parts of the church east of the crossing were demolished at the dissolution, and the Norman crossing tower and transepts collapsed in 1553. The present-day church consists of the nave of the Norman abbey church, the 14th-century lady chapel and west wall, and a 16th-century west tower, added after the dissolution.