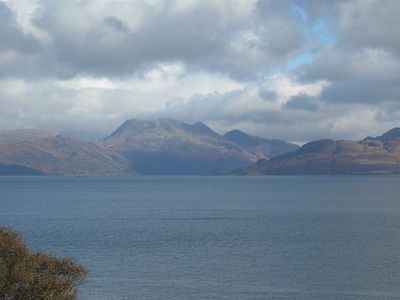 Beinn Sgritheall is the highest mountain in the Glenelg area of the Highlands of Scotland. The main approach is via Arnisdale on the shores of Loch Hourn or via Gleann Beag to the north, with its well-known brochs. The view from the summit was described by Sir Hugh Munro, a founder member of the Scottish Mountaineering Club, as "perhaps the most beautiful I have seen in Scotland".
Mountains in the British Isles are classified according to height. At 3,196 feet Beinn Sgritheall is a Munro, being a Scottish mountain over 3,000 feet . It is also classified as a Marilyn given its prominence of 500 metres . It is the highest mountain on the Glenelg peninsula, an area of largely uninhabited land bounded by Loch Alsh and Loch Duich to the north and by Loch Hourn to the west and south.