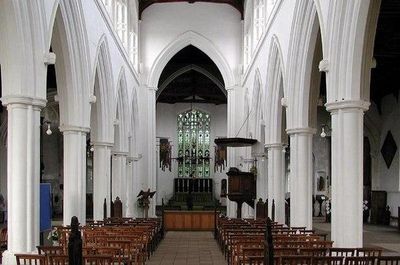 Thaxted is a town and civil parish in the Uttlesford district of northwest Essex, England. The town is situated in the valley of the River Chelmer, not far from its source in nearby Debden, and is 97 metres above sea level . The town is 15 miles north from the county town of Chelmsford, and 5.5 miles east from the M11 motorway. The parish contains the hamlets of Cutlers Green, Bardfield End Green, Sibleys Green, Monk Street, and Richmond's Green. Much of its status as a "town" rests on its prominent late medieval guildhall, a place where guilds of skilled tradesmen regulated their trading practices, and its large and fine English Perpendicular parish church.

According to A Dictionary of British Place Names, Thaxted derives from the Old English thoec or þæc combined with stede, being a "place where thatching materials are got". In the 1086 Domesday Book, the settlement is referred to as 'Tachesteda' and in subsequent official records variously as "Thacstede", "Thaxstede", "Thackestede" and "Thakstede", amongst other spellings. As late as the nineteenth century, the spelling "Thackstead" was still in use.