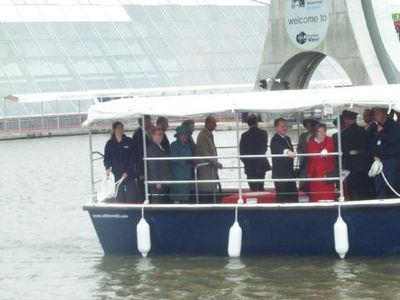 The Falkirk Wheel is a rotating boat lift in central Scotland, connecting the Forth and Clyde Canal with the Union Canal. The lift is named after Falkirk, the town in which it is located. It reconnects the two canals for the first time since the 1930s. It opened in 2002 as part of the Millennium Link project.

The plan to regenerate central Scotland's canals and reconnect Glasgow with Edinburgh was led by British Waterways with support and funding from seven local authorities, the Scottish Enterprise Network, the European Regional Development Fund, and the Millennium Commission. Planners decided early on to create a dramatic 21st-century landmark structure to reconnect the canals, instead of simply recreating the historic lock flight.