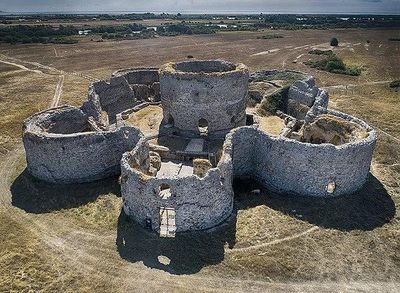 Camber Castle, also known formerly as Winchelsea Castle, is a 16th-century Device Fort, built near Rye by King Henry VIII to protect the Sussex coast of England against French attack. The first fortification on the site was a small, round artillery tower, constructed by Henry between 1512 and 1514, overlooking the Camber anchorage and the entrance to Rye Harbour. In 1539, increasing tensions with France encouraged Henry to rethink his coastal defence plans, and Camber Castle was rebuilt and extended over the next year under the direction of the Moravian engineer, Stefan von Haschenperg. The results were considered unsatisfactory and further work was carried out from 1542 to 1543, at great expense, to rectify the problems. The result was a large, concentric artillery fort, with a central keep, surrounded by four circular bastions and a circular entrance bastion, built from stone and brick.
The finished castle was initially equipped with 28 brass and iron artillery guns and a garrison of 28 men, commanded by a captain. It may have seen service in 1545 when a French fleet attacked the coast, but its operational value was short lived. The Camber and the surrounding harbours began to silt up, becoming unusable by shipping, and the coastline receded away from the fort, eventually placing it well in-land. Furthermore, the fort had been superseded by newer European military designs even before it had been completed, and peace with France later in the century removed much of the requirement for the fort. The castle still remained operational up until 1637, when it was closed by King Charles I. With the outbreak of civil war in 1642, much of the fortification was dismantled by Parliamentary forces to prevent it being used by the Royalists.