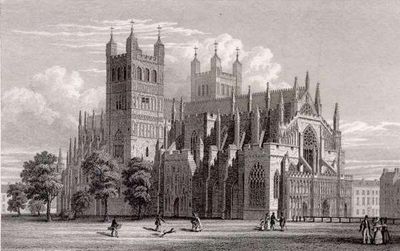 Exeter Cathedral, properly known as the Cathedral Church of Saint Peter in Exeter, is an Anglican cathedral, and the seat of the Bishop of Exeter, in the city of Exeter, Devon, in South West England. The present building was complete by about 1400, and has several notable features, including an early set of misericords, an astronomical clock and the longest uninterrupted vaulted ceiling in England.

The founding of the cathedral at Exeter, dedicated to Saint Peter, dates from 1050, when the seat of the bishop of Devon and Cornwall was transferred from Crediton because of a fear of sea-raids. A Saxon minster already existing within the town was used by Leofric as his seat, but services were often held out of doors, close to the site of the present cathedral building.