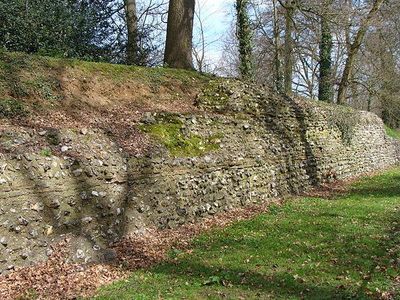 Verulamium was a town in Roman Britain. It was sited in the southwest of the modern city of St Albans in Hertfordshire, Great Britain. A large portion of the Roman city remains unexcavated, being now park and agricultural land, though much has been built upon. The ancient Watling Street passed through the city. Much of the site and its environs is now classed as a scheduled ancient monument.
Before the Romans established their settlement, there was already a tribal centre in the area which belonged to the Catuvellauni. This settlement is usually called Verlamion. The etymology is uncertain but the name has been reconstructed as *Uerulāmion, which would have a meaning like "[the tribe or settlement] of the broad hand" in Brittonic. In this pre-Roman form, it was among the first places in Britain recorded by name. The settlement was established by Tasciovanus, who minted coins there.