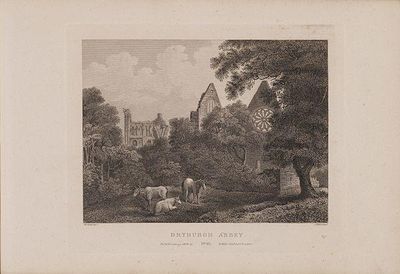 Dryburgh Abbey, near Dryburgh on the banks of the River Tweed in the Scottish Borders, was nominally founded on 10 November 1150 in an agreement between Hugh de Morville, Constable of Scotland, and the Premonstratensian canons regular from Alnwick Abbey in Northumberland. The arrival of the canons along with their first abbot, Roger, took place on 13 December 1152.
It was burned by English troops in 1322, after which it was restored only to be again burned by Richard II in 1385, but it flourished in the fifteenth century. It was finally destroyed in 1544, briefly to survive until the Scottish Reformation, when it was given to the Earl of Mar by James VI of Scotland. It is now a designated scheduled monument and the surrounding landscape is included in the Inventory of Gardens and Designed Landscapes in Scotland.