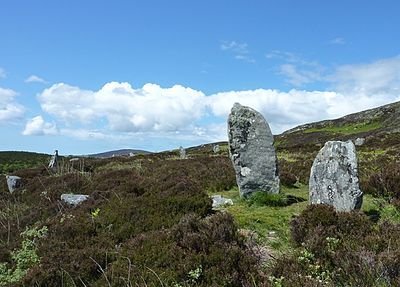 Pobull Fhinn is a stone circle on the Isle of North Uist in the Outer Hebrides. The name is Gaelic. The first word has been variously spelt as "pobull", "poball", "pobul" or as plural "pobuill". The modern standard spelling would be "Poball Fhinn". The phrase can be translated as "Fionn's people,", "the white/fair people", or "Finn's tent." The plural form "Pobuill Fhinn" can be translated as "Fionn's peoples" and is unlikely to be correct.
The stones were probably named after the legendary Gaelic hero Fionn mac Cumhaill known in English as Finn or Fingal. The present title may constitute a modern rationalisation of a word now obsolete in colloquial Scottish Gaelic: "Pùball Fhinn" was a common phrase in the ancient Fenian cycle of Gaelic lore and indicated his nomadic residence.