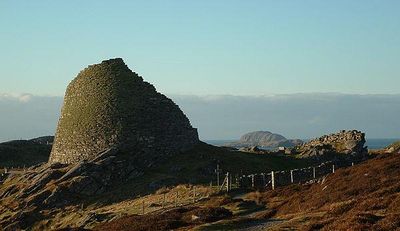 Dun Carloway is a broch situated in the district of Carloway, on the west coast of the Isle of Lewis, Scotland . It is a remarkably well preserved broch - on the east side parts of the old wall still reach to 9 metres tall.

Most brochs were built in the period from 100 BC to 100 AD. Dun Carloway was probably built in the 1st century AD. It probably got its current name from the Norse Karlavagr , a relic of its time as part of the Kingdom of the Isles. Through the centuries Dun Carloway remained in use until the floor level was too high due to build-up of the occupation layers.