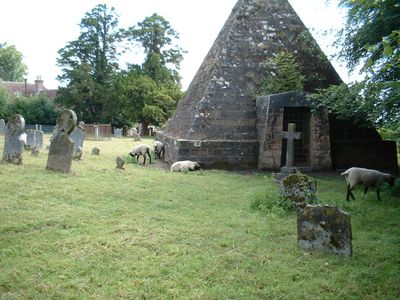 Many people first hear about John "Mad Jack" Fuller in association with the follies he built in and around Brightling, Sussex, England. These structures stand monument to his burning desire to be remembered long after his death.

But this is not the most important legacy he created. He was a philanthropist, a patron of the arts and sciences and a founding member of the Royal Institution.

Jack Fuller is immortalized in the lasting gifts he bestowed upon the community: the Fullerian Professorships, the Eastbourne Lifeboat, the barrel organ - bells at St Thomas a Becket Church and Bodiam Castle which he bought to save from demolition.

The Fullers of Sussex were wealthy ironmasters and owned vast amounts of property, including sugar plantations in Jamaica.

Fuller, being a Squire, a Member of Parliament, and a captain in the Sussex Yeomanry Cavalry was well connected and is associated with many notable figures of his day. Jack Fuller's pyramid is a 25 foot (7.62 m) high mausoleum built in 1811, twenty-three years before his death. It stands in the churchyard of St. Thomas & Becket, Brightling. The ninth verse of Grey's Elegy is inscribed on one wall:
'The boast of heraldry, the pomp of pow'r
And all that beauty, all that wealth e'er gave
Await alike th' inevitable hour
The paths of glory lead but to the grave'

Local legend had it that Fuller was entombed in the pyramid in full dress and top hat seated at a table set with a roast chicken and a bottle of wine. This was discovered to be untrue during renovations in 1982. Fuller is indeed buried in the conventional manner beneath the pyramid.