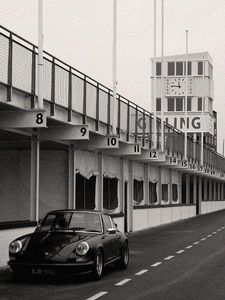 Goodwood Circuit is a historic venue for both two- and four-wheeled motorsport in the United Kingdom. The 3.8 kilometres circuit is situated near Chichester, West Sussex, close to the south coast of England, on the estate of Goodwood House, and completely encircles Chichester/Goodwood Airport. This is the racing circuit dating from 1948, not to be confused with the separate hillclimb course located at Goodwood House and first used in 1936.
The racing circuit began life as the perimeter track of RAF Westhampnett airfield, which was constructed during World War II as a relief airfield for RAF Tangmere. The first race meeting took place on 18 September 1948, organised by the Junior Car Club and sanctioned by the Duke of Richmond and Gordon. The winner of the first race was P. de F. C. Pycroft, in his 2,664 c.c. Pycroft-Jaguar, at 66.42 m.p.h. Stirling Moss won the 500cc race , followed by Eric Brandon and "Curly" Dryden, all in Coopers.