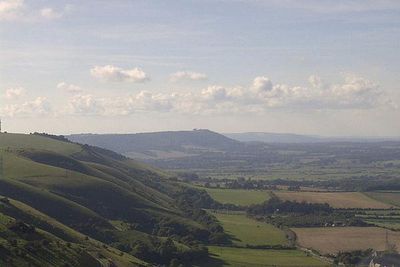 The South Downs National Park is England's newest national park, having become fully operational on 1 April 2011. The park, covering an area of 1,627 square kilometres in southern England, stretches for 140 kilometres from Winchester in the west to Eastbourne in the east through the counties of Hampshire, West Sussex and East Sussex. The national park covers the chalk hills of the South Downs and a substantial part of a separate physiographic region, the western Weald, with its heavily wooded sandstone and clay hills and vales. The South Downs Way spans the entire length of the park and is the only National Trail that lies wholly within a national park.

The idea of a South Downs National Park goes back to the 1920s, when public concern was mounting about increasing threats to the beautiful downland environment, particularly the impact of indiscriminate speculative housing development on the eastern Sussex Downs . In 1929, the Council for the Preservation of Rural England, led by campaigners including the geographer Vaughan Cornish, submitted a memorandum to the Prime Minister urging the case for national parks, including a national park on part of the South Downs. When however, towards the end of World War II, John Dower was asked to report on how a system of national parks in England and Wales might be established, his 1945 report, National Parks in England and Wales, did not identify the South Downs for national park status, but rather included it in a list of "other amenity areas". Sir Arthur Hobhouse's 1947 Report of the National Parks Committee took a different view, and he included the South Downs in his list of twelve areas recommended for designation as a national park, defined by John Dower as an "extensive area of beautiful and relatively wild country in which, for the nation's benefit...the characteristic landscape beauty is strictly preserved".