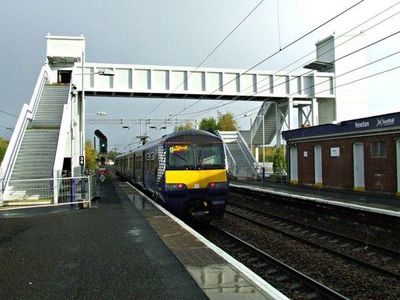 Newton railway station is a railway station located between the neighbourhoods of Drumsagard, Halfway, Newton and Westburn in the town of Cambuslang , Scotland. The station is managed by Abellio ScotRail on the Argyle and Cathcart Circle Lines.

The original Newton station was opened as part of the Clydesdale Junction Railway on 1 June 1849. The station also served the Hamilton Branch of the Caledonian Railway. It closed on 19 December 1873 and a new station was opened 662 yards due west on the same day. The station later served trains to and from the Glasgow Central Railway and the Lanarkshire and Ayrshire Railway, though neither route survived beyond the mid 1960s - the GCR route via Carmyle closed on 5 October 1964, whilst the L&AR ceased to carry passenger traffic through to the coast as long ago as 1932, with complete closure beyond Neilston following in December 1964. The remainder still forms part of the Cathcart Circle Lines, but there are no longer any through services from here to stations between Muirend & Neilston - passengers must change at Mount Florida.