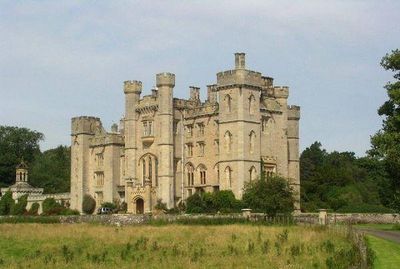 Duns Castle, Duns, Berwickshire is a historic house in Scotland, the oldest part of which, the massive Norman Keep or Pele Tower, supposedly dates from 1320. The castle and most of the structures on the property are designated as a scheduled ancient monument.
The early history of the building is virtually unknown. A keep was built on the lands granted to Thomas Randolph, 1st Earl of Moray by King Robert the Bruce in 1320. That structure may have been razed by the English in the 16th century, possibly during the Rough Wooing in 1545 when the nearby town of Duns was burned to the ground,, as that the part of the building claimed to date from that time has been assessed as dating from the 15th – 16th century by architectural historians.