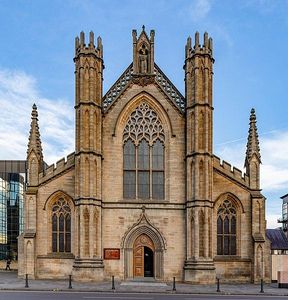 The Metropolitan Cathedral Church of Saint Andrew or Glasgow Metropolitan Cathedral is a Roman Catholic Cathedral in the city centre of Glasgow, Scotland. It is the mother church of the Roman Catholic Archdiocese of Glasgow. The Cathedral, which was designed in 1814 by James Gillespie Graham in the Neo Gothic style, lies on the north bank of the River Clyde in Clyde Street. St Andrew's Cathedral is the seat of the Archbishop of Glasgow, currently the Most Reverend Philip Tartaglia. It is dedicated to the patron saint of Scotland, Saint Andrew.

From the Scottish Reformation of 1560 until the beginning of the Catholic Emancipation process in 1791, with the Roman Catholic Relief Act of 1791 – which restored certain civil rights and freedom of worship – Roman Catholics in Glasgow had to worship covertly. By the end of the 18th century, particularly with the influx of Irish immigrants to Glasgow during the nascent stages of the Industrial Revolution, there emerged an increasing demand for a Roman Catholic church in the city. In 1805 there were approximately 450 Catholics in the city, but by 1814 the number of recorded communicants in the city had increased to 3,000, and in that year the decision was taken by the Rev. Andrew Scott to build a new church in Clyde Street.