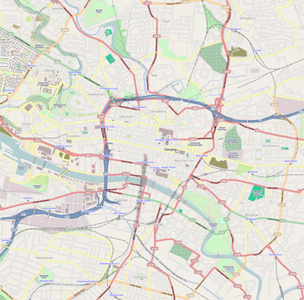 Glasgow Central is one of two principal mainline rail terminals in Glasgow, Scotland. The station was opened by the Caledonian Railway on 1 August 1879 and is one of 20 managed by Network Rail. It is the northern terminus of the West Coast Main Line north of London Euston), and for inter-city services between Glasgow and England. The other main station in the centre of the city is Glasgow Queen Street.

With just under 33 million passengers in 2017–18, Glasgow Central is the twelfth-busiest railway station in Britain and the busiest in Scotland. According to Network Rail, over 38 million people use it annually, 80% of whom are passengers. The station is protected as a category A listed building.