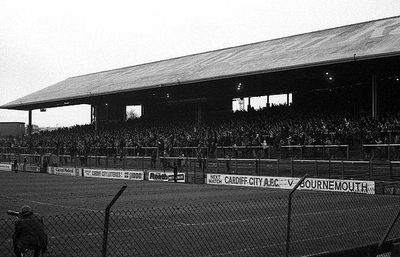 Ninian Park was a football stadium in the Leckwith area of Cardiff, Wales, that was the home of Cardiff City F.C. for 99 years. Opened in 1910 with a single wooden stand, it underwent numerous renovations during its lifespan and hosted fixtures with over 60,000 spectators in attendance. At the time of its closure in 2009, it had a capacity of 21,508.

Cardiff City had originally been playing home fixtures at Sophia Gardens but the lack of facilities at the ground had prevented them from joining the Southern Football League. To combat this, club founder Bartley Wilson secured a plot of land from Cardiff Corporation that had previously been used as a rubbish tip and construction of a new ground began in 1909. The stadium was completed a year later and named Ninian Park after Lieutenant-Colonel Lord Ninian Crichton-Stuart, who had acted as a financial guarantor for the build. A friendly match against Football League First Division champions Aston Villa was organised to open the ground. It was originally constructed with a single wooden stand and three large banks made of ash, but gradual improvements saw stands constructed on all sides of the pitch. The four stands were named the Canton Stand, the Grange End, the Popular Bank and the Grandstand.