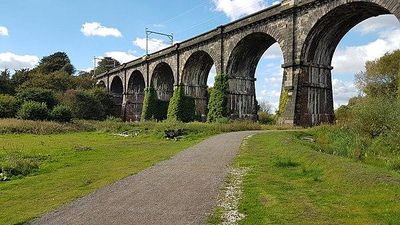 The Sankey Viaduct is a railway viaduct in North West England. It is a designated Grade I listed building and has been described as being "the earliest major railway viaduct in the world".
In 1826, the Liverpool and Manchester Railway Company was authorised to construct the world's first intercity railway. One obstacle on the selected 50 km route between Liverpool and Manchester was the Sankey Valley. The company's principal engineer, George Stephenson, designed the Sankey Viaduct for the double-track railway to traverse the valley and Sankey Canal with sufficient clearance for the masts and sails of the Mersey flats that used the canal.