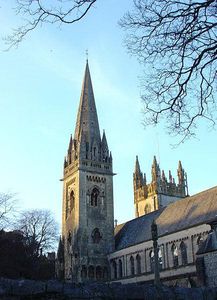 The Diocese of Llandaff is an Anglican diocese that traces its roots to pre-Reformation times as heir of a Catholic bishopric. It is headed by the Bishop of Llandaff, whose seat is located at the Cathedral Church of Saint Peter and Saint Paul in Llandaff, a suburb of Cardiff. It currently covers most of the former Welsh county of Glamorgan, but once stretched from the River Towy to the middle of the Wye Valley.
The diocese was reputedly founded in 560 or earlier by Saint Teilo, during the monastic movement initiated by Saint Dubricius who presided over several monasteries in Ergyng, including Hentland and Moccas. Dubricius is said to have made Teilo abbot of this daughter monastery at Llandaff, which after Dubricius' death became a monastic cathedral and the chief monastery in South Wales. Saint Dubricius is usually given as the first bishop.