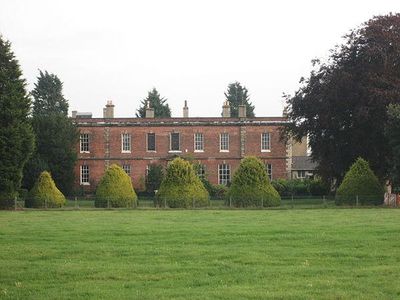 Shardlow Hall is a 17th-century former country house at Shardlow, Derbyshire now in use as commercial offices. It is a Grade II* listed building which is officially listed on the Buildings at Risk Register.
The house was built in 1684 for Leonard Fosbrooke, originally to an H-plan design with two storeys with parapets and a six-bay entrance front. A series of six Leonard Fosbrookes succeeded to the estate, two of whom served as High Sheriff of Derbyshire. A new seven-bayed west garden front was constructed in 1726, and in the late 18th century the entrance front was extended by the creation of single-storey wings, each terminating in a pedimented two-storey pavilion.