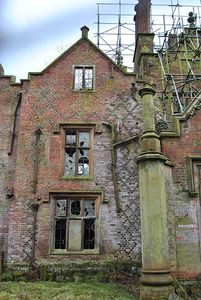 Bank Hall is a Jacobean mansion in Bretherton, Lancashire, England. It is a Grade II* listed building and is at the centre of a private estate, surrounded by parkland. The hall was built on the site of an older house in 1608 by the Banastres who were lords of the manor. The hall was extended during the 18th and 19th centuries. Extensions were built for George Anthony Legh Keck in 1832–1833, to the design of the architect George Webster.

Legh Keck died in 1860 and the estates passed to Thomas Powys, 3rd Baron Lilford. The contents were auctioned in 1861 and the hall used as a holiday home and later leased to tenants. During the Second World War the Royal Engineers used it as a control centre. After the war the estate was returned to the Lilfords whose estate offices moved to the east wing of the house until 1972 when the house was vacated. The building was used as a location for the 1969 film The Haunted House of Horror.