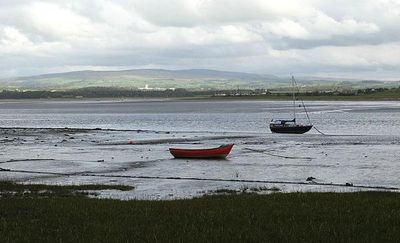 Several elucidations for the origin of the name Lune exist. Firstly, it may be that the name is Brittonic in genesis and derived from *lǭn meaning "full, abundant", or "healthy, pure" . Secondly, Lune may represent Old English Ēa Lōn as a phonetic adaptation of a Romano-British name referring to a Romano-British god Ialonus who was worshipped in the area.
The river begins as a stream at Newbiggin, in the parish of Ravenstonedale, Cumbria, at St. Helen's Well and some neighbouring springs. On the first two miles of its course, it is joined by four streams, two of them as short as itself, but two much longer. These are the Bessy Beck , the Dry Beck of 4.9 kilometres' length at 0.32 miles from St. Helen's Well, the Sandwath Beck at 0.37 miles , and the Weasdale Beck at 1.6 miles from the well. Weasdale Beck is the uppermost headwater of River Lune recorded in Environment Agency's Catchment Data Explorer.