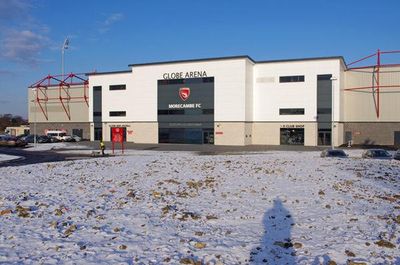 The Globe Arena is a football stadium in Morecambe, Lancashire, England, which is used by Morecambe F.C. It is named after Globe Construction, the company that built the stadium. The stadium holds up to 6,476 supporters, with 2,173 seats available in the Main Stand, which runs the length of one side of the pitch. Opposite the Main Stand is an uncovered terrace with a capacity of 606, giving a similar feel to the ground as that at Christie Park. At either ends of the pitch are the home and away stands, with the home end holding a maximum of 2,234 supporters and the away end having a capacity of 1,389. In the north east corner of the stadium is the community block, which is split between two floors. The building also houses a gym and a ticket office for visiting fans. The stadium replaced the old Morecambe F.C. stadium, Christie Park, which was Morecambe's home since 1921.

Work officially started on clearing the site of trees on 9 May 2009, and work above ground started in early September 2009. By the middle of September the first main structure of the Main Stand was visible, and in early 2010 the other three stands were being developed. In late May the pitch was seeded.