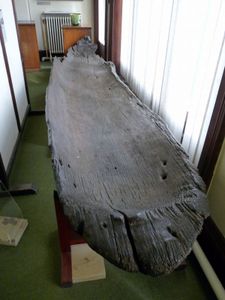 Martin Mere is a mere near Burscough, in Lancashire, England, on the West Lancashire Coastal Plain. The mere is a vast marsh, around grid reference SD 41 15 that was, until it was drained, the largest body of fresh water in England.
Martin Mere was formed at the end of the last Ice Age, when water filled a depression in the glacial drift. Since then its size has varied as water levels have risen and fallen. The original giant lake can be seen on Christopher Saxton's map from 1579 and stretched from Rufford in the east, to Churchtown in the west. To the north of the lake were the villages of Mere Brow and Holmeswood, the site of Holmeswood Hall, built by the Heskeths as a hunting lodge. South of the lake was the Scarisbrick Hall estate, Martin Hall and Tarlefarwood, now known as Tarlscough.