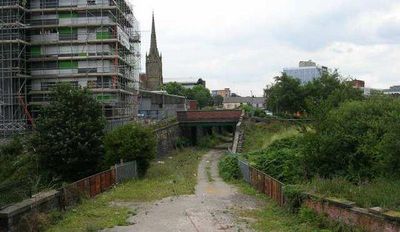 Maudland Bridge railway station was once the Preston terminus of the Longridge Branch Line, in Lancashire, England. It was located on Maudland Road, between a bridge over the Lancaster Canal and Cold Bath Street. The Maudlands district of Preston gets its name from the medieval St. Mary Magdalen's leper hospital, which once stood near the present-day St Walburge's Church.
In 1850, the Fleetwood, Preston and West Riding Junction Railway built the 862-yard Miley Tunnel to connect two existing lines, the Preston and Longridge Railway at Deepdale, and the Preston and Wyre Joint Railway at Maudland. The plan was to link Fleetwood on the Fylde coast to Skipton in the West Riding of Yorkshire. However the plan collapsed in 1852, and so the tunnel was initially used for goods traffic only.