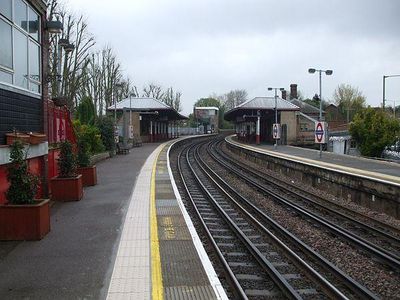 Rickmansworth is an interchange railway station in Rickmansworth, Hertfordshire, northwest of central London, served by the London Underground Metropolitan line and by Chiltern Railways. It is one of the few London Underground stations beyond Greater London and as a consequence is in Travelcard Zone 7. The station is a good location to alight from to explore the Chess Valley.

Rickmansworth station opened on 1 September 1887 as the terminus of the Metropolitan Railway's extension from Pinner. In 1889, the line was extended from Rickmansworth to Chesham. Rickmansworth was shared with the Great Central Railway which reached Quainton Road in 1898. The extension of Metropolitan Line electrification brought electric services out to Rickmansworth on 5 January 1925, allowing the locomotive change point to be moved .