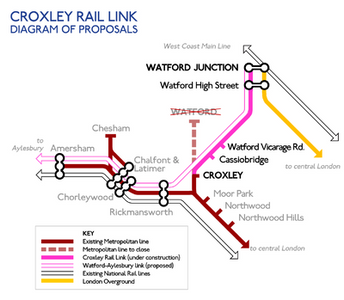 The Croxley Rail Link, or the Metropolitan Line Extension, was a proposed railway engineering project in the Watford and Three Rivers districts of Hertfordshire, England, that would have connected the London Overground and the London Underground's Metropolitan line at Watford Junction. The Metropolitan line's terminus at Watford Underground station would have been closed and the line diverted and extended from Croxley to Watford Junction via a reopened section of closed line. The main proponent of the scheme was Hertfordshire County Council but it failed to win the support of Transport for London which owns the Watford branch. The engineering works would have consisted of the realignment of the disused Watford and Rickmansworth Railway's line between Croxley Green and Watford High Street, with the construction of a viaduct over the Grand Union Canal, River Gade and A412 road and two new stations before branching into the London Overground line near Watford High Street and continuing to Watford Junction.
The proposed route was featured in a Transport for London network map for 2016 and the Transport for London Indicative 2025 Transport Map on which Watford tube station does not appear. Were the link to be built, direct services between Watford Junction and Amersham would be possible but were not included in the business case for the scheme.