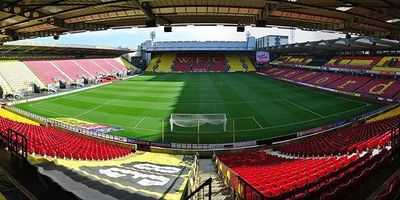 Vicarage Road is a stadium in Watford, Hertfordshire, England, and is the home of association football club Watford of the Premier League. An all-seater stadium, its current capacity is 21,577 following the completion of the new Sir Elton John Stand in 2014, and expansion work in 2015 and again throughout 2016 and 2017, this included expansion of the football pitch. Expansion and upgrade work is to continue, with plans to expand Vicarage Road to around 30,000.
It has been the home of Watford since 1922, when the club moved from Cassio Road. The ground was officially opened by Col. Charles Healey of Benskins Brewery for the visit of Millwall on 30 August 1922. In addition to being Watford's home since opening, the stadium was also home to Wealdstone F.C. between 1991 and 1993, and to rugby union side Saracens from 1997 until they moved to their new home at Allianz Park in February 2013.