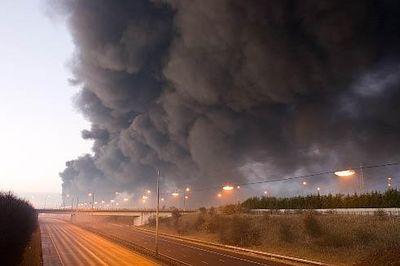 The Buncefield fire was a major fire at an oil storage facility on 11 December 2005 at the Hertfordshire Oil Storage Terminal, located near the M1 motorway, Hemel Hempstead, in Hertfordshire, England. The terminal was the fifth largest oil-products storage depot in the United Kingdom, with a capacity of about 60 million Imperial gallons of fuel. The terminal is owned by TOTAL UK Limited and Texaco .
The first and largest explosion occurred at 06:01 UTC near tank 912, which led to further explosions which eventually overwhelmed 20 large storage tanks.
The emergency services announced a major emergency at 06:08 and a firefighting effort began. The cause of the explosion was a fuel-air explosion in a vapour cloud of evaporated leaking fuel. The British Geological Survey monitored the event, which measured 2.4 on the Richter scale.
News reports described the incident as the biggest of its kind in peacetime Europe and certainly the biggest such explosion in the United Kingdom since the 1974 Flixborough disaster. The flames had been extinguished by the afternoon of 13 December 2005. However, one storage tank re-ignited that evening, which firefighters left to burn rather than attempting to extinguish it again.