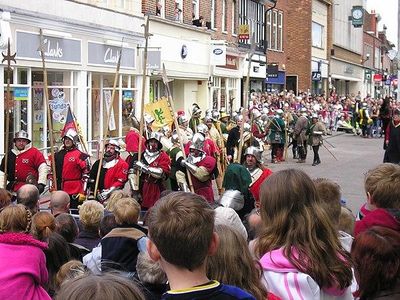 The First Battle of St Albans, fought on 22 May 1455 at St Albans, 22 miles north of London, traditionally marks the beginning of the Wars of the Roses in England. Richard, Duke of York, and his allies, the Neville earls of Salisbury and Warwick, defeated a royal army commanded by Edmund Beaufort, Duke of Somerset, who was killed. With King Henry VI captured, a subsequent parliament appointed Richard of York Lord Protector.
The incapacitation of Henry VI by mental illness in 1454 had led to the recall to court of Richard of York, his closest adult relative. Back in 1447, York had been assigned as Lieutenant of Ireland, basically in exile away from England, while his long time rival, Edmund Beaufort, Duke of Somerset, and favorite of the king, had been given the charge of the Lieutenancy of France. After Somerset's own failure in France, York unexpectedly returned to London with significant support not only from the nobility, most of whom saw the incompetence of Somerset's efforts in France, but also from the public. He presented himself as a champion of the law and urged the King to have Somerset tried and held accountable for his failures. He also wished to be recognised as heir presumptive to the English throne while Henry VI was childless. York formed an armed force to force the issue in 1452, and after meeting with the council of war and the King, who desperately wanted to avoid a conflict, York's demands were agreed on. York disbanded his army as a result, but was soon arrested and held prisoner for three months. An execution was avoided as the King was nervous about arousing trouble; the Duke of York was very popular and known as a man of honour. York was only released after he agreed to swear an oath at St. Paul's Cathedral that he would never again take up arms against the King.