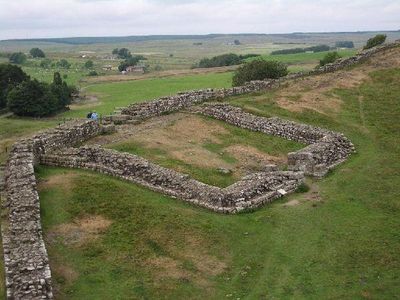 Milecastle 10 was a milecastle of the Roman Hadrian's Wall. It is located near to the modern village of Throckley in Tyne and Wear, northern England. Much of the milecastle lies beneath a road but partial remains of the north wall can be seen in the garden of Dene House. It has been excavated several times and its walls located, though the remains have been "considerably damaged by ploughing". Only one of the two associated turrets has been located and excavated.

Milecastle 10 was a long-axis milecastle with Type IV gateways. Such milecastles were thought to have been constructed by the legio XX Valeria Victrix who were based in Deva Victrix . The usually straight Hadrian's Wall changes direction in this area, making a 20 degree turn just before it crosses a Dene and heading towards the Great Hill at Heddon-on-the-Wall.