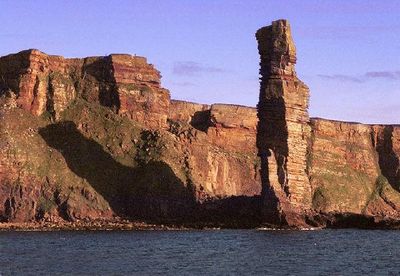 The Old Man of Hoy is a 449-foot sea stack on Hoy, part of the Orkney archipelago off the north coast of Scotland. Formed from Old Red Sandstone, it is one of the tallest stacks in the United Kingdom. The Old Man is popular with climbers, and was first climbed in 1966. Created by the erosion of a cliff through hydraulic action some time after 1750, the stack is no more than a few hundred years old, but may soon collapse into the sea.

The Old Man stands close to Rackwick Bay on the west coast of Hoy, in Orkney, Scotland, and can be seen from the Scrabster to Stromness ferry. From certain angles it is said to resemble a human figure.