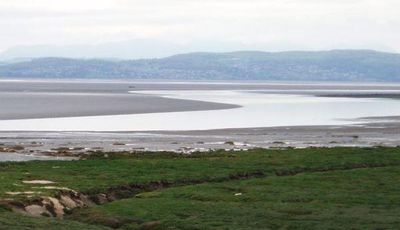 Morecambe Bay is a large estuary in northwest England, just to the south of the Lake District National Park. It is the largest expanse of intertidal mudflats and sand in the United Kingdom, covering a total area of 310 km2 . In 1974, the second largest gas field in the UK was discovered 25 miles west of Blackpool, with original reserves of over 7 trillion cubic feet . At its peak, 15% of Britain's gas supply came from the bay but production is now in decline. It also one of the homes of the High brown fritillary.
The rivers Leven, Kent, Keer, Lune and Wyre drain into the Bay, with their various estuaries making a number of peninsulas within the bay. Much of the land around the bay is reclaimed, forming salt marshes used in agriculture. Morecambe Bay is also an important wildlife site, with abundant bird life and varied marine habitats, and there is a bird observatory at Walney Island. The bay has rich cockle beds, which have been fished by locals for generations.