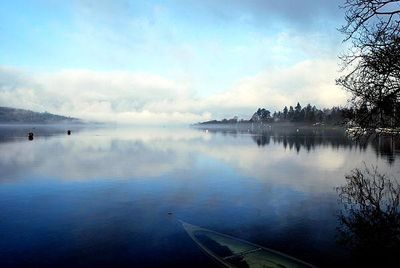 Windermere is the largest natural lake in England. It is a ribbon lake formed in a glacial trough after the retreat of ice at the start of the current interglacial period. It has been one of the country's most popular places for holidays and summer homes since the arrival of the Kendal and Windermere Railway's branch line in 1847. Historically forming part of the border between Lancashire and Westmorland, it is now within the county of Cumbria and the Lake District National Park.
The word 'Windermere' is thought to translate as " 'Winand or Vinand's lake'... The specific has usually been identified with an Old Swedish personal name 'Vinandr', genitive singular 'Vinandar'"... although "the personal noun is of very restricted distribution even in Sweden." Another possibility is that it refers to a "Continental Germanic personal noun, 'Wīnand'...Since this name could not have been current until the 12th century, the fact that the Old Norse genitive singular '-ar-' has been added to it, it would suggest that Old Norse was still a living language in the area at that time." Alternative spellings may be 'Wynhendermere' and 'Wynenderme' The second element is Old English 'mere', meaning 'lake' or 'pool'. It was known as "Winander Mere" or "Winandermere" until at least the 19th century.