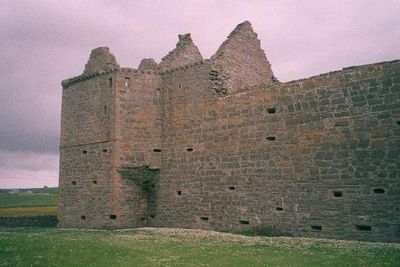 Noltland Castle is located near Pierowall on the island of Westray in the Orkney Islands of Scotland. It dates mainly to the later 16th century, although it was never fully completed. The castle is protected as a scheduled monument.
In 1560, Adam Bothwell, Bishop of Orkney, granted the lands of Noltland to his brother-in-law Gilbert Balfour, who built the castle. Balfour was Master of the Royal Household to Mary, Queen of Scots, and was involved in the plot to kill her husband, Henry Stuart, Lord Darnley. After Mary's deposition and exile, he continued to support the queen. Noltland was seized by Robert Stewart, 1st Earl of Orkney, an opponent of Mary's supporters, but he was forced to hand it back to Balfour in the early 1570s. Balfour was executed in Sweden in 1576, and, in 1598, the castle was again seized by the Earl of Orkney . By 1606, the castle had been restored to the Balfours once more, when it was sold to Sir John Arnot, Lord Provost of Edinburgh, who later became Sheriff of Orkney.