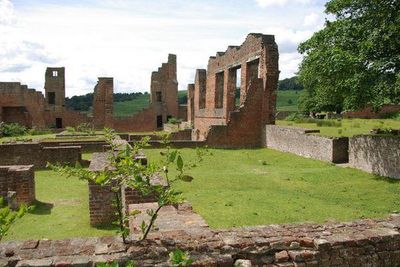 Edward Grey's son Sir John Grey of Groby married Elizabeth Woodville, who, after John's death married King Edward IV. Their son Thomas Grey, 1st Marquess of Dorset made preparations for building the first Bradgate House in the late 15th century but died before work began. It was his son, Thomas Grey, 2nd marquis of Dorset who built the first Bradgate House, completing it circa 1520. This is one of the first unfortified great houses in England and one of the earliest post-Roman use of bricks. It was lived in by the Grey family for the next 220 years. It is believed that the house was the birthplace of Lady Jane Grey, later Queen, ruling for a mere 9 days before being overthrown by Mary I. Jane was executed in 1553 and when her father was executed the following year the estate passed to the crown. Local history claims that groundskeepers marked the occasion of Jane's execution by pollarding the estate's oak trees in a symbolic beheading. Examples of pollarded oaks can still be seen in the park. In 1563 the family regained favour, and the Groby manor, including Bradgate, was restored to Jane's Uncle, Lord John Grey of Pirgo. His great-grandson was made Earl of Stamford. Later earls acquired estates in Enville, Staffordshire, and Dunham Massey, Cheshire.

Sometime after 1739 they moved out of Bradgate, which began a long decline. The spectacular ruins of the house are still visible at the centre of the park. The house was approximately 200 feet long, featuring a main hall measuring 80 by 30 feet . As well as considerable remains of walls and fireplaces, it has four truncated towers and the chapel is still intact, containing a tomb effigy to Henry Grey, 1st Earl of Stamford and his wife.