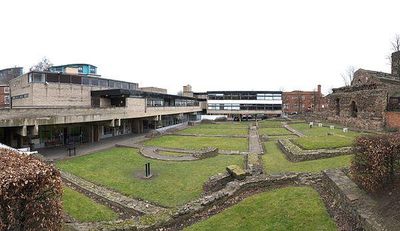 The Jewry Wall is a substantial ruined wall of 2nd-century Roman masonry, with two large archways, in Leicester, England. It stands alongside St Nicholas' Circle and St Nicholas' Church. It formed the west wall of a public building in Ratae Corieltauvorum , alongside public baths, the foundations of which were excavated in the 1930s and are also open to view. The wall gives its name to the adjacent Jewry Wall Museum.

The origin of the name of the wall is debated. It is unlikely to relate to Leicester's medieval Jewish community, which was never large and was expelled from the town by Simon de Montfort in 1231. One theory that has achieved widespread currency is that the name bears some relation to the 24 "jurats" of early medieval Leicester, the senior members of the Corporation, who were said to have met, as a "jury", in the town churchyard—possibly that of St Nicholas. But it seems more likely that the name derives from a broader folk belief attributing mysterious ruins of unknown origin to Jews. Such attributions are found at a number of other sites elsewhere in England and other parts of Europe.