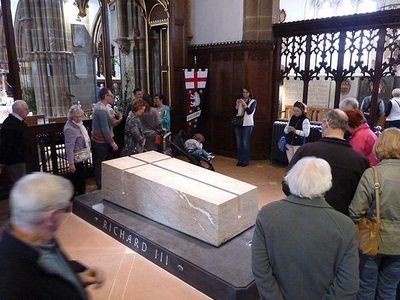 The Cathedral Church of Saint Martin, Leicester, commonly known as Leicester Cathedral, is a Church of England cathedral in the English city of Leicester and the seat of the Bishop of Leicester. The church was elevated to a collegiate church in 1922 and made a cathedral in 1927 following the establishment of a new Diocese of Leicester in 1926.
The remains of King Richard III were reburied in the cathedral in 2015 after being discovered nearby in the foundations of the lost Greyfriars chapel.