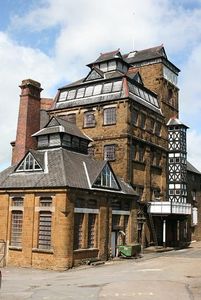 Hook Norton Brewery is a regional brewery in Hook Norton, Oxfordshire, England, several miles outside the Cotswold Hills. Founded in 1849, the brewing plant is a traditional Victorian 'tower' brewery in which all the stages of the brewing process flow logically from floor to floor; mashing at the top, boiling in the middle, fermentation and racking at the bottom. Until 2006, the brewing process was powered by steam. Beer is still delivered in the village by horse-drawn dray.
Visitors can take a tour of the brewery, brew their own beer in the micro brewery and visit the museum with historic brewery artifacts and local history displays.