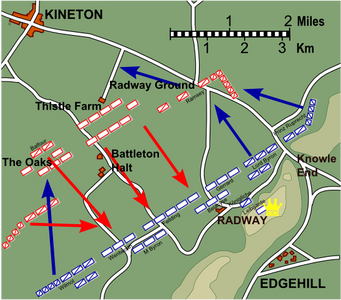 The Battle of Edgehill was a pitched battle of the First English Civil War. It was fought near Edge Hill and Kineton in southern Warwickshire on Sunday, 23 October 1642.

All attempts at constitutional compromise between King Charles and Parliament broke down early in 1642. Both King and Parliament raised large armies to gain their way by force of arms. In October, at his temporary base near Shrewsbury, the King decided to march to London in order to force a decisive confrontation with Parliament's main army, commanded by the Earl of Essex.