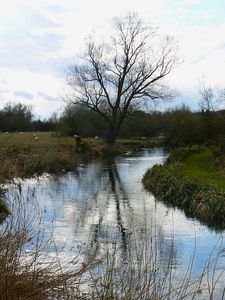 The Kennet is a river in the south of England, and a tributary of the River Thames. The lower reaches of the river are navigable to river craft and are known as the Kennet Navigation. This, together with the Avon Navigation, the Kennet and Avon Canal and the Thames, links the cities of Bristol and London. The former local government district of Kennet in Wiltshire was named after it.

The River Kennet from near its sources west of Marlborough in Wiltshire down to Woolhampton in Berkshire is a 111.1-hectare biological Site of Special Scientific Interest . This is primarily because it has an extensive range of rare plants and animals that are unique to chalk watercourses.