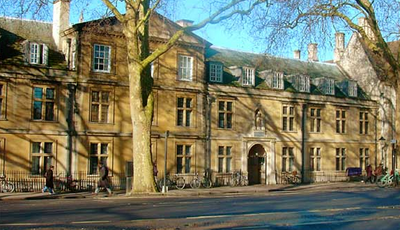 Blackfriars, Oxford is a Permanent Private Hall of the University of Oxford. Blackfriars houses three distinct institutions: the Priory of the Holy Spirit, the religious house of the friars, whose current prior is Robert Gay; Blackfriars Studium, the centre of theological studies of the English Province of the Dominican Friars ; and Blackfriars Hall, one of the constituent educational institutions of the University of Oxford. The current acting Regent of both the hall and studium is David Goodill. The name Blackfriars is commonly used to denote a house of the Dominican Friars in England, a reference to the black-colored "cappa", which is part of their habit.

Blackfriars Hall is a Permanent Private Hall, meaning that it is owned and governed by an outside institution and not by its fellows.