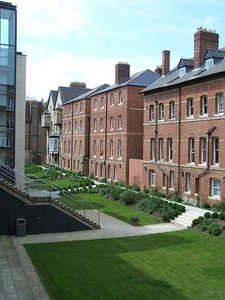 St Anne's College is a constituent college of the University of Oxford in England. It was founded in 1879 and received full college status in 1952. Once a women's college, it has been coeducational since 1979. It has some 450 undergraduate and 200 graduate students. It retains an original aim of allowing women of any financial background to study at Oxford. A recent count shows St Anne's accepting the highest proportion of female students of any college. The College stands between the Woodstock and Banbury roads, next to the University Parks and Radcliffe Observatory Quarter. In April 2017, Helen King, a retired Metropolitan Police Assistant Commissioner, took over as Principal from Tim Gardam. Alumnae include Danny Alexander, Ruth Deech, Helen Fielding, Martha Kearney, Simon Rattle and Victor Ubogu.

What is now St Anne's College began life as part of the Association for the Education of Women, the first institution in Oxford to allow for the education of women. It later became the Society of Oxford Home-Students. Unlike other women's associations, the Society had no fixed site, instead offering lodgings in houses spread across Oxford. This allowed students from a range of financial backgrounds to study at Oxford, as the cost of accommodation in the women's halls was often prohibitive. In 1942, it became the St Anne's Society, which received a university charter to be founded as a women-only college in 1952.