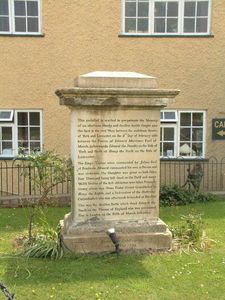 The Battle of Mortimer's Cross was fought on 2 February 1461 near Wigmore, Herefordshire , not far from the Welsh border. It was a major battle of the Wars of the Roses. The opposing forces were an army led by Jasper Tudor and his father, Owen Tudor, and other nobles loyal to King Henry VI of the House of Lancaster, his wife, Margaret of Anjou, and their seven-year-old son, Edward, Prince of Wales, on one side, and the army of Edward, Earl of March. Some sources say it was fought on 3 February, and the exact location has been the subject of some speculation.
In 1460, with King Henry VI a prisoner, Richard, Duke of York attempted to depose Henry and become king himself. His closest supporters dissuaded him from this step, but he secured an Act of Accord by which he and his descendants would inherit the throne on Henry's death, thus disinheriting Henry's young son Edward, Prince of Wales. Inspired by Henry's queen, Margaret of Anjou, York's enemies and rivals began gathering armies in Wales and Northern England. York sent Edward of March, his 18-year-old eldest son, to gather support in the Welsh Marches while he himself led an army to the north. On 30 December, York led his men into a trap at the Battle of Wakefield where he was killed.